skip to main | skip to sidebar

Not my fucking fault. 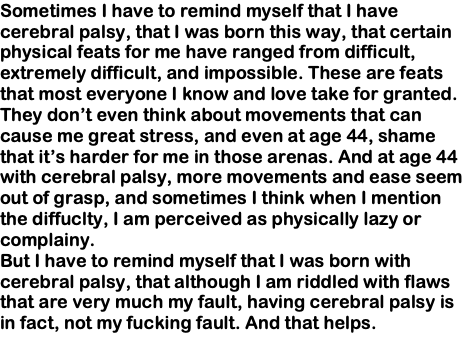 A, Z, and I visited the “home” of some ultra-rich guru in the mountains. It was a bizarre place of high technology situated at the edge of a cliff. Along one side of the house was a three-dimensional square area of forcefields, magnetic and other. I walked in one end and started to float. Stepping into another end caused me to feel sick, as if my head was being squeezed by a vice.

It became increasingly clear that this was some sort of resort or commune. The grounds were swarming with people, and, blue people. These were Rubenesque humanoids, naked but without genitalia, faceless and entirely blue. They ambled around, bumping into the people. I bumped into several, and they were weirdly soft, like marshmallows. The owner of the commune escorted us up some stairs and onto a large balcony with railings at the side to prevent anyone from falling into the canyon below. We lay on our bellies at one end of the balcony as the owner walked up on a dais to deliver a speech. A control panel was built into the stone directly in front of me, with buttons and digital numbers. I reached into the console and pushed a button. An alarm went off and Z grabbed my shoulder.

“What did you do?” he shouted.

The stone beneath me rose in a circle from the floor. I was elevated higher and higher, above everyone else and then the platform I was on expanded as it moved toward the cliff and bottomless canyon. Handles appeared near my hands as the platform tilted at a dangerous angle and spun 360 degrees. I grabbed the handles but my hands were greasy and they kept slipping away as the platform tried to dump me in the canyon. Around and around I went, and I saw the owner was sitting in a truck on his dais. He said, “I might run over you with my truck!”

The platform tilted once more, and I dangled just for a second above the canyon before it flattened out again and shrunk, drifting again to the space above my original position, then lowering me to safety.

A stood at the far right of the balcony. The floor had risen into a wave far above his head, and he was trying to pull it toward him with his right arm. The wave gave a little, looked like it was made of taffy. He was trying to pull it down to his feet. Then wave stiffened, and its curve suddenly buckled away from A. The violent movement ripped off his arm, flinging it behind me. He didn’t make a sound, but I screamed and the wave rose up and blocked him from view.

Z grabbed my arm and led me past some blue people into an entrance and up another flight of stairs into a small cafeteria. I grabbed Z’s shoulders. “Is A okay? Did he lose his arm?”

“Yes, he did,” Z said, then disappeared into the cafeteria crowd. I was upset that I didn’t know where A was and the general apathetic reaction to the amputation.

I sat down at a table in front of a window. The window looked into a small room. A was in there, and he was flexing a strong, prosthetic arm. He was smiling and didn’t appear to be in pain, which relieved me.

But then I noticed the seam where the arm had been connected. It was blue, blue like the blue people. A saw me through the window and waved. As he waved, the seam bulged and grew, turning blue a few inches above and below the seam. I tried to yell at him but the cafeteria was too loud. He moved out of view, and in dread I realized he was turning into one of the blue people.

In some version of our backyard in Paris. One of my sisters had invited a weirdo over, and he was obsessing about a tree that was growing crookedly in the neighbor's yard. He wanted to cut it down. Against my pleas, my sister gave this wartyish guy Dad’s chainsaw. He reached over the fence with the chainsaw, sawing at the tree and it crashed down against the neighbor's house. In a frenzy, the dude began to cut at the fence with the chainsaw, slobbering, whipping it around like it was plastic toy, until my sister knocked him in the head and it whipped out of his hands backward at me, falling just inches from my feet.

I’m in a huge, empty garage. Everything inside has been packed up by my family and put in a van to move. They did this while I was sleeping, and nobody tried to wake me up to ask me to help, and I feel guilty. It’s raining in the garage, and there are puddles of gasoline scattered all around. I am alone except for a toddler boy wearing a raincoat, and a car with its headlights pointed in my direction. I’m supposed to be watching the kid. I think he’s my brother. His name is Aggie. A beautiful woman I love in the dream is behind the wheel and her mother-in-law is in the passenger seat. They are both watching me quietly. The toddler runs all around the wet garage, laughing and slipping on the concrete. It’s very dangerous. I dart towards him, carrying both a lighter and an enormous iPhone. The kid runs in front of me, so I grab for him, which throws the lighter and phone in an arc to land in a puddle of gasoline. I slip in the rain, falling, and the back of the poor toddler’s head smacks gruesomely against the concrete. He cries pitifully as I search the back of his head for blood, but I’m also distracted by searching for my phone and seeing that my lighter has ignited several puddles of gasoline. The woman in the car switches on her brights and starts the engine. The toddler starts to sob and shout, both cute and horrifying, “AGGIE DEAD! AGGIE DEAD!”
The fire grows brighter.
“AGGIE DEAD! AGGIE DEAD! AGGIE DEAD!”


Had the weirdest dream recently that I worked in the same office block as a professor in a business college. Our offices were adjacent and open to each other. He had a floating briefcase, and he was also the gatekeeper to a time machine on the other wall of his office, which was a circle at the end of a ramp. People came to ask him questions before they used it. I’d watch the far wall morph into long ago and far future times and places and the people vanish through the circle. One day I got up my nerve. He wasn’t in his office that day, so to summon him, I carried his floating briefcase out into the hallway and back inside the office and he appeared at his desk.
“I want to use the machine,” I asked.
“Okay, where do you think is the most crowded place at any time?”
“The beach.”
“That’s boring. You need to go to Vatican City at any time before 1000 AD.”
“Why?”
“Because the Popes are working on time machines that are supremely more advanced than anything I have. I need you to go there through my special time cannon.” He stepped away from his desk and pointed to the front wall, and a shelf appeared, a perfect square of nine square shelves, each one holding a basketball. “You will stand in front of the time cannon, which will send you to a special time in Rome, probably 337 BC, where the Pope is creating a mind-boggling time machine ENTIRELY OUT OF SUGAR. Sugar!”
“Okay.”
I did what he asked and the far wall transformed into a view of the flowing Tiber and a cluster of buildings on the far side. The basketballs exploded and the gatekeeper screamed, “They are made out of sugar!”

I sang today for the first time in a long, long while, and it made me cry.

I'm not very good, but I can carry a passable tune. More importantly, it's a part of me that I was always proud of, that I cared about, that I knew intimately. Any talent I have comes from my Mother, who sang beautifully in our home all the years my brothers and sisters were growing up.

And when I sang today, I thought: why have you forgotten this room in your heart? Why did you abandon a place you loved?
Posted by Todd Austin Hunt No comments:

I had a dream that I was supposed to meet you and Dad at a waterpark somewhere in Ohio. I went there, looking for you two, and finally found you, but you kept leaving and I lost you. The park was a horror; people were getting in fights and killing each other. Also, the water people were getting stuck in water park machines and were getting crushed and dismembered. Corpses floated all over the place, and the employees used the bodies to scare people and tried to terrorize me with one. I kept trying to call Dad, but it never connected and I learned that you had left. I walked to a C-store at the edge of the park and bought a huge case of water. Instead of shopping carts, they had donkeys. And the donkey simultaneously tried to cuddle and to kick me in the face. It was getting dark and I was lost and I started to panic, then made a decision to get a hotel room and leave the next day in full light.

I promise I wasn't eating from there.

One day some time ago, my toilet became clogged for mysterious reasons. It wouldn’t flush properly but didn’t overflow. Nothing was going down there anymore. Luckily, I have a backup toilet, but this toilet is my favorite, so I had to get it fixed. I called the maintenance man and when he arrived, explained the problem and went to run some errands.

When I returned the maintenance man was gone and my favorite toilet was fixed. He had left the work order on the counter, which was pinned down by a gigantic spoon. On the order he had written, in huge handwriting that had obviously been mutated with amazement, terror, and disgust:

As soon as I saw the spoon, I remembered. A few days before, I had dumped a large storage container of objectionable pumpkin seeds, thinking stupidly, this is a good idea, they will decompose faster. I had forgotten there was a big ‘ol soup spoon I was using for a scoop buried in the seeds. The toilet swallowed seeds and spoon, and choked on the spoon.

So now I imagined this poor maintenance man’s surprise and horror, finding a spoon in my toilet. This man thinking, why did this thing happen? Why does he need a spoon in there, so close to a toilet, and then, IN THE TOILET? Is he eating . . . IS HE EATING IN THERE, FROM THERE? What is he eating from there? Oh my God. THERE WAS A SPOON IN THE TOILET!!!!

Oh no, I promise, I promise!, I was not eating from there.

I hope he didn’t tell anyone, like I just did.